Self-Sabotage or Self-Obsession? A Personal Saga

Self-sabotage is a term we now see regularly disseminated and discussed within the spiritual and therapeutic arena. But what does it really mean and what is it really all about?

In the generally accepted version, self-sabotage relates to an unconscious drive or impulse to derail and wreck (or sabotage) our personal progress, particularly when we begin to exceed our personal expectations by pushing on what are often called our ‘upper limits’. This may relate to earning more money or finally achieving a professional breakthrough; starting a new relationship in which we are (for once) treated with love and respect; or having more success in whatever way we define that success. It relates to the old belief that goes something along the lines of

‘It’s too good to be true’, ‘Things are going too well, therefore, something has to go wrong soon’

We all grow up with conditioned beliefs and expectations for what I deserve (or don’t deserve) in life. These conditioned family and social beliefs will influence, direct and limit some or all areas of a person’s life. The motivating force of most therapeutic, healing and spiritual pursuits is to become free of these limiting, historic dictates. Many people spend years in therapy, striving for selfhood through the attempt to illuminate and resolve these familial constraints. However, they are often left feeling frustrated, exhausted and without the results they had hoped for.

There is no doubt that the formative period of our psychological and emotional conditioning also shapes our belief systems, world view and ultimately our identities. The on-going unravelling of our false identities through therapy and healing allows us to live in an increasingly more alive and uncontained way. However, the undying focus on excavating self-sabotage, limiting beliefs and trauma more often than not has the contrary effect of reinforcing old, personal stories and strengthening our identity – the sense of me that is separate and that always stands against something.

The perceived act of self-sabotage is always based on an idea of what and who I should be or want to be (based on previous experience of deprivation and lack). It is this idea and the root from which it grows that actually holds us hostage. In this cycle of blindly pushing forward we miss the essence of what is really going on and refuse to see how we have become lost in our own labyrinth of illusionary pursuits.

Let’s look at one commonly accepted form of self-sabotage – procrastination. There is an idea that I should do a something, that I should undertake or complete some task or activity. Yet, I do not. The belief that I should and the reality that I do not creates great internal conflict and struggle and I then undertake other subsidiary activities to avoid the pain caused by the initial perceived procrastination.

At the heart of this struggle is an idea of what I should or shouldn’t be doing. This idea may have been engendered by family, peers or the culture. It doesn’t matter which. The procrastination is actually resistance, resistance between an idea and reality. Mostly we do not see this so the cycle of resistance continues, whilst being fed by others through the peddling of their own ideas for me.

How often is it as simple as just not wanting to do what I believe I should or must? And believing also that I can’t say no to this thing, that I don’t have a choice. I have often found that the person seized in the grip of procrastination simply doesn’t want to do what they think they should. Or they want to do that thing but there is resistance around the association to that thing, such as the demands of a parent. When given permission to release the need to do the unwanted thing or activity, the person in procrastination can relax deeply, especially with the realisation that it was all just a storm in a tea cup – a lot of drama about nothing.

In these situations, part of us may feel we do not have a choice, that we are pushed into a choice that is someone else’s choice for me. Therefore, we resist the feeling of having no control over our life.

Yet… the theory of self-sabotage, backed up by spiritual and mundane concepts, tells me that I always have a choice. This is where it gets interesting and very confusing too. I want to believe I have a choice (over my own life) because this makes me feel powerful. But then, it also makes me feel powerless when I make bad choices or when I am not rewarded for my good choices, according to my own expectations (which are actually the expectations of others that I have come to make my own). The implication is that I shape and direct every event in my life – I can get it right or I can get it wrong. If I keep getting it wrong then I believe I have to face and deal with my self-sabotage patterns whilst also managing an expanding sense of guilt and shame. 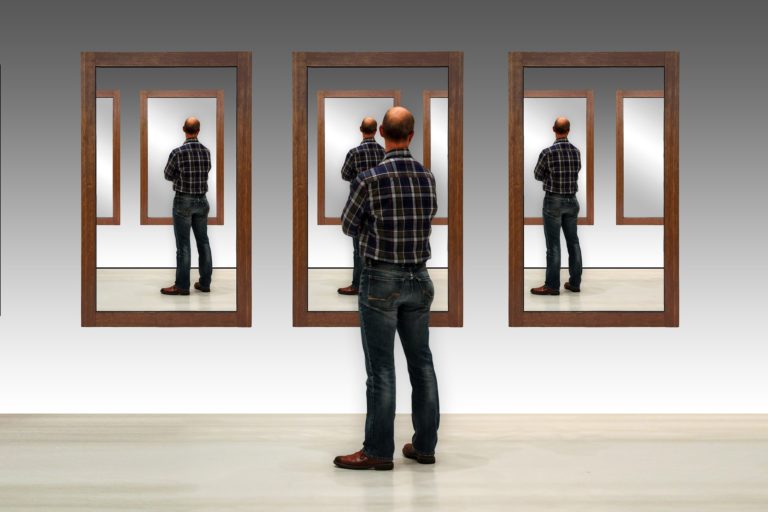 When I believe I have ultimate control of everything, it creates an enormous burden of felt responsibility… for everything. It also makes me very self-obsessed indeed. The fixation on my self-sabotage and working out all the intricacies of Me can make me more and more self-absorbed. Life becomes more and more complicated, more and more loaded with meaning of how every event relates to me, limits me, takes away my pleasure.  I become lost in myself. It is the death of joyful and childlike simplicity. I lose sight of the original intention, that deep longing for peace that comes with the absence of myself.

How I believe my life should be is quite simply a mental construct and has no relation to the simple immediacy of life. Indeed, it denies the directness and spontaneity of life. It seems that as a species we cannot live without the addiction to ourselves and the story of what is happening to me in every moment – whether good, bad, painful, pleasurable, more of this, less of that. Ultimately it’s all the same. The endless search for overcoming self-sabotage is just a part of the trap of myself. The more I work to be free of (the worst aspects of) me, the more in reality I reinforce my separate sense of myself, and the pain of living that. I have to own everything. Every thought, every feeling, every event. At times of deflation, I feel terribly victimised by life and by myself; then when feeling charged, powerful and ready to take back control of my life, I (temporarily) become the hero of my own journey. Please!!!

I have to fight to become free of myself. I cannot let go for fear of losing it all.

There seems to come a time, when things begin to matter less. A time when life is just life and not a constant commentary or judgment on me. If it’s not all about me, it no longer carries with it the reactive sense of responsibility and urgency. The illusion of control and ownership starts to slip away. I am not that important, no longer worth defending or promoting. Our felt trauma, and the search to overcome it, can make us very self-absorbed. It can become an obsession. A never-ending fixation. As this is seen and felt, life starts to become more relaxed, regardless of what is happening or not happening. I start to see that what I worked so hard towards achieving, and earning, was always here. Unconditionally.

Where there is a willingness to see that I am the source of my problems and a readiness to be free of myself, the hardness, solidity and certainty of (the idea of) me can begin to gently and lovingly dissolve into life’s embrace. Nothing then needs to change. Everything is simply and beautifully perfect as it is. Even previously perceived problems. Then the idea of self-sabotage and the accompanying directive that I should be doing better – and need to change – no longer has any meaning

Who Am I Without My Work?
Previous Article